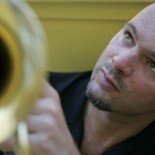 ‘On a good night he is one of the world’s finest players, and last night was such a one. Fluent, impassioned and technically superb’ – Jack Massarick, THE EVENING STANDARD

‘Damon Brown is a superb musician with a unique voice on both trumpet and Flugelhorn’ – Ian Carr,  THE VIRGIN  ROUGH GUIDE TO JAZZ 2005

‘Brown has a bright, gleaming tone, a superbly poised attack, and a fine rhythmic sense that paces high long notes, stuttery phrases, pauses and sudden foot-on-the-gas accelerations against each other in eloquent conjunction’ – John Fordam,  THE GUARDIAN

Few players on the contemporary UK scene play bebop as well together as  trumpeter Damon Brown.

‘Damon Brown ..he has been a fan of the authentically crisp, behind-the-beat phrasing of this coolly grooving genre all his short professional life’ – John Fordam, THE GUARDIAN

‘By any standards, Damon Brown is a splendid jazz trumpeter – forthright and adventurous with a tone that modulates effortlessly from bright to mellow according to the mood.’ Dave Gelly, The Observer